Just recently I was reminded of the power of setting intention and then completely letting go and trusting.

So I wanted to share with you something I uncovered ‘by accident’ a few days ago. As you know I’m always writing, whether journalling, blogging or writing for the many books in my head. And of course I write and share a lot on social media.

Well, I was on Facebook and felt the impulse to send someone a private message in response to something they had posted. So I did. But the surprise came when I opened up the message box and saw the last message I had sent two years earlier.

A couple of years leading up to that I had been connected with an English astrologer  who had said I should use my psychic and creative abilities more. I was just sharing this in my message and added these comments at the end : ‘…..Been doing tarot readings and sessions for years. Going online to offer sessions for a bit of anonymous fun. Could actually get rich doing this. Haha.’

I just stared at the words. I realised I had written this down in a very light and playful manner, not fully understanding what energy was behind them. ‘Getting rich doing this’ was something I always just threw in with a smile.

The anonymous part was very important as I honestly didn’t think it would be a good idea for me to get out there in the public with this work. It just wouldn’t go with my painting and public work. Or so I thought.

At the time my thought had been to create an identity behind which to do readings for people. You know the sort of thing- Lady Zaza with her crystal ball. Yes, I’m grinning as I write this.

However, circumstances unfolded differently from what my active mind had planned. I contacted some online agencies and applied to be on their team, sharing my ‘credentials’ and giving a CV. I was just being moved to get online and do this.

One after another of these agencies did not entertain me as they didn’t respond to the readings I had done as I was interpreting things differently from what the traditional books dictated.

Well, time went by and I developed my own set of Mandala Oracle cards and began doing readings with them for friends and at local events. Parallel to this I was doing my social networking bootcamp and getting more and more savvy on the various platforms. 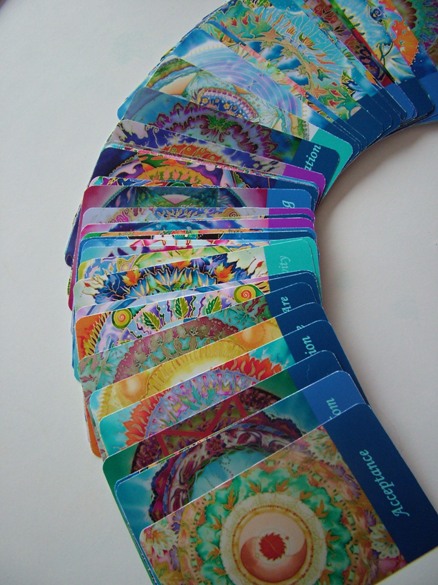 Then one day the Blog Talk Radio show just emerged, originally with a friend of mine. After doing an open month of sharing our daily diary on air, we decided we wanted to continue by holding space for others on a weekly basis. But within a few weeks it transpired that I was meant to hold this space alone and so I began showing up weekly to do readings for people online on radio. It began as 60 mins and has now been extended to 90 mins.

The Oracle Thursday also emerged on Facebook and now I have Livestream on Thursdays too.

For a long while now I have been advertising openly on my main site that I offer sessions for people to come and work with me, using the cards and intuition. Looking at what obstacles seem to be there and how to stay present regardless.

I was speechless when I took stock of what had actually happened in the two years in between me making that original tongue in cheek statement and where I am now. And seeing how it had fully come to fruition was amazing.

In fact, it had evolved in a way that my mind could never have worked out at that time.

I laughed softly as I realised what  a favour these agencies had done me. Thank you so much for rejecting me. Thank you for saying no and pointing me in a different direction.  Thank you for helping me to get more and more aligned with the Divine flowing through me.

And as for the ‘getting rich’ part. I have said for years and years in a joking way that I would love to become rich and famous so that I could make a difference in the world helping others to connect with their inner truth and remember who they are.

Maybe I’ll look back on this blog post in a couple of years and smile in the same way.

2 Responses to Setting Intention, Letting Go and Watching the Manifestation