Raw Food and How to Make Marzipan Treats

I posted a photo of some tasty little treats I made recently and some of you commented on how tasty they looked and asked if you could have the recipe.

Yes, of course you can. I scour the net and then pick up ideas and play with them, adapting them to my taste and preference. As you probably know, I now follow the raw food lifestyle and so am very open to all sorts of delicacies I can eat that will both taste good and energise me at the same time.

Now the funny thing is that there is a little story that goes with these balls. 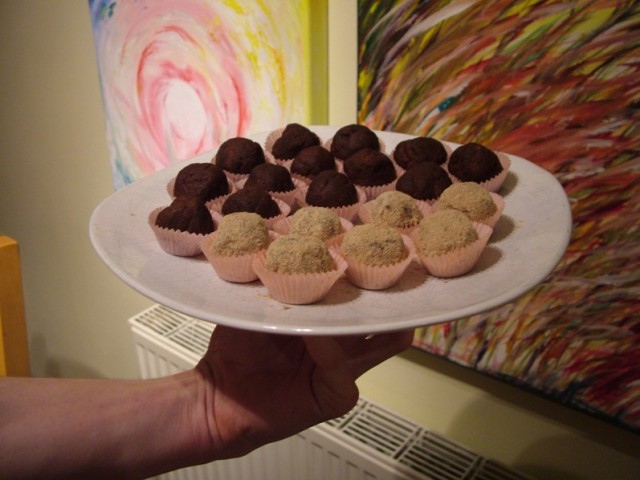 I put a whole load of almonds into water to soak so that they would be easier to blitz up in the food processor. That part went well but when I tried to process them, no matter what I did and how long I did it, I couldn’t get them to go really smooth. I kept using a spatula to scrape the mixture into the middle and played with different settings.

It depends on how powerful a processor you have. We only have the Jamie Oliver Food Processor, not the high power Vitamix and so we can’t create the smooth butters and pastes that some recipes describe.  One day soon I’ll do a review on the one we have.

Anyway after about half an hour I decided I had invested more than enough time and so I scooped the mixture up into a plastic bag and put it in the fridge. I couldn’t face it until the next day again. But when I unpacked it to have another go I found the consistency had improved and my marzipan mass was indeed much stickier and firmer than the night before.

Now you’ll have to bear with me as I was experimenting and I’m not very good at writing down quantities. But I will share with you what I put in. With raw food recipes you can just keep adding to the mixture if the taste and quantities aren’t quite right for you.

Blitz your soaked and rinsed almonds until you get a firm marzipan-like paste. This can take quite a long time so let your processor run for a good ten minutes stopping every now and then to scrape the mixture down from the sides into the centre. Leave in the fridge overnight if you want ( I did to preserve my sanity). Add some coconut oil and the agave nectar (according to taste). Add a good heaped tablespoon of raw cacao powder and mix in lightly using the edge of  a wooden spoon to retain a loose texture. Don’t let the two colours completely blend so that you have a nice marbled effect.

Roll into balls and then roll in a mixture of coconut powder and cinnamon.  You can also take each ball and roll it in some cacao powder in your hands instead. That’s how we got two different colours as you can see in our photos.

Next step, just start eating. Ours didn’t last very long so I’m not sure how long they would keep in the fridge. Just play with this and see what quantities suit your palette.

Let me know if you make them and how you found them. Enjoy!

3 Responses to Raw Food and How to Make Marzipan Treats