Last month I was surfing the net, looking at various forums related to arts and crafts in the UK. And just by chance I came across UKHandmade. So I had a quick look, liked what I saw and signed up. It was quick and easy to put together my profile and get started. Then I began to dig a bit deeper and find out what was going on behind the scenes. It was then that I discovered a competition…which had just about run out. That was what really got me interested.

They were asking for articles relating to arts and crafts containing no more than 500 words. It was Thursday and a quick look at my calendar showed me that Friday midnight was the deadline. So…..on Friday evening I had time to sit down and think. But I didn’t think for long as the clock was ticking away and there were a few things to be done. 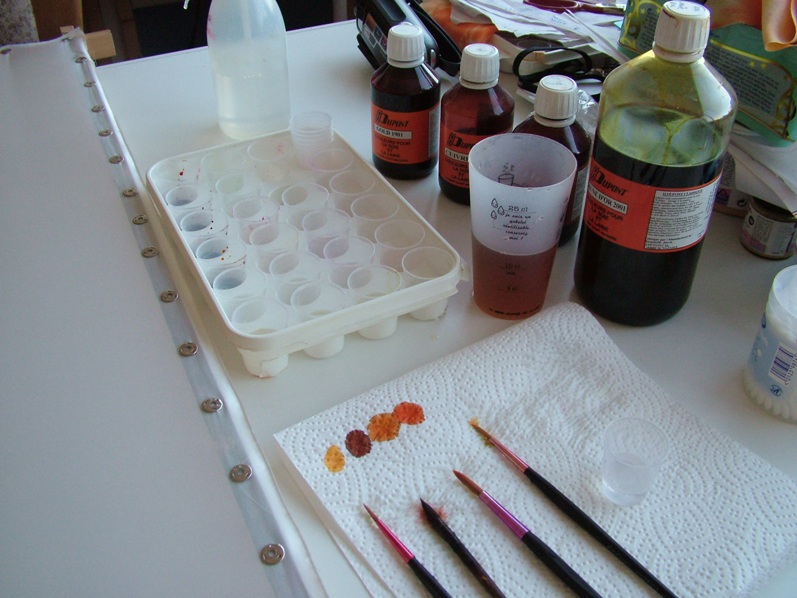 What on earth could I write that would be of interest? There were so few people on the site who even did silk painting…I wonder why? And suddenly it came to me. Very often the idea that this could be a very expensive hobby is enough to deter newcomers. Well, this was the perfect opportunity to prove otherwise. And so the concept was born: how to paint on silk on a shoestring budget. I was off the starter’s block in an instant and a short while later I sat back and realised I was finished.

It was great to just get my head out of the way and allow free flow. That’s always the key for me. The less I think about what I am putting down in word, the easier it all just manifests in front of me. Okay…so, a quick spell check, one read-through to make sure it all makes sense, and off it goes.

You can imagine how delighted I was a couple of weeks later to get an email saying I had been chosen as joint winner of the competition but I was to keep it under my hat until it had been publicly announced! Wow, that really made my day. I was going to have the article published in the Autumn issue of the ezine as well as have an ad for my website. And….there would be an indepth interview with me in UKHandmade’s blog. Yay!

I was very good and did manage to keep this a secret (well, not 100%). But today the announcement has been made and I’m allowed to shout it from the rooftops.

“I’ve won a competition run by UKHandmade!!” And here’s the link to the announcement.

In a week’s time you can read the interview and I’ll be publishing a link to it from this page.

Oh, and while you’re over there you might consider joining the online community at UKHandmade. They’re a lovely, multi-talented bunch and have lots to offer.

NOTE: the original UKHandmade website has closed and been completely refurbished. Many of the older articles and interviews were not transferred to the new site. Here is a link to my article for those of you who have not read it yet – How to Do Silkpainting on a Shoestring Budget.

4 Responses to I’ve Won a Competition Run by UKHandmade