Going to the Art Fairs

They always say that you should never participate in any show or fair untiil you’ve been there as a visitor first. And there’s really 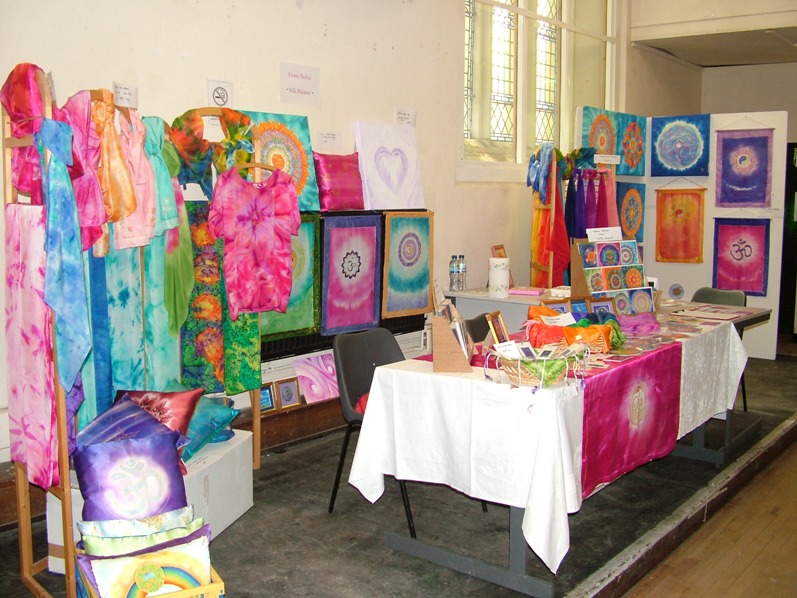 This was the first time I’d been at this particular event in Bristol, a converted church with a reall goth feel to it. I don’t know about the Feng Shui of the place, but it definitely could do with a good workover.

I had booked a stall for the two days and was intending to do some silk painting demonstration during this time. The only problem was that there weren’t enough people to demonstrate anything to. In fact, there was a decided lack of visitors full stop. Those of you who have done these events will know what it is like. Over lunch time there aren’t many people coming through because everyone is having lunch. The busy time tends to be around 3 – 5pm.

This time, however, not only did no-one come during lunch time but they didn’t even turn up after lunch. In fact, they didn’t turn up at all. It seems that no-one really knew the event was on. And that’s decidedly bad for those who have paid money to have a stall.

The usual nonsense started. The stallholders all started to wander around visiting each others’ stalls and buying some little bits and pieces to cheer each other up.

For the last hour it was dead. The only reason I stayed put was that, since I was going to be there the next day, I had to leave everything in the hall overnight and that meant staying until the event finished at 6pm on the first day. It was a completely different story the next day as I knew that I could bolt whenever I wanted to. And that happened around 3.30pm. It had all become quite unbearable and I got really honest with myself, knowing that no-one was going to come in and buy lots of items in the last couple of hours.

So I slowly began to pack everything up and take leave…

It’s hard when you attend these events and are optimistic that you will get some new leads, lots of sales and connections, as well as loads of tips from the other artists. I didn’t even cover my costs and was certainly not alone there.

And the question arises – what could they have done differently. Well, that’s always a very good question. I had the feeling that the organisers were well on the way to finding out the answer to that one all through the weekend. Was it due to the fact that they left everything until the last minute? Did it have anything to do with the fact that they didn’t do any really effective advertising? Even with the best event in the world, you’re not going to have any success unless you let people know it is happening.

From my experience there are certain things that can give you some clues as to how things are likely to run. First of all the pitch fee is a great give-away. If you get the stall for next to nothing, then you can be sure that there is some correlation here with with the likelihood of a high number of visitors. Low fee, low attendance. If the word has got around that the event is a great success and you are likely to get good sales, you can bet that the organisers will be cashing in on this with the fees they charge. However, a few pounds more is well worth it if you have the prospect of doing very well on the day.

Go onto the forums and ask around. Your fellow artists and craftsmen will be more than willing to share feedback with you as to how they did. The events that do well tend to be booked out well in advance and you might be lucky enough to get on the waiting list.

Another thing to watch out for is whether or not there are other arty events running at the same time. In this case there was indeed another event which was going head to head with the one I was at. It was even charging an entry fee and the art work was in general much more expensive. But it was well-established and won the day easily.

In fact that is something the organisers need to pay attention to if they want to have any success at all and draw crowds in to their event.

I know it’s not easy and it was probably quite a daunting task getting this whole thing off the ground. But the unverse has a way of making a very clear statement when we have rested on our laurels and taken certain things for granted. There was certainly no mercy being shown. However, this wasn’t bad in many ways. I just keep coming back to Edison who discovered 1,000 ways of how not to make a lightbulb.

I wonder how many ways the organisers found of how not to run a successful art event….??

2 Responses to Going to the Art Fairs